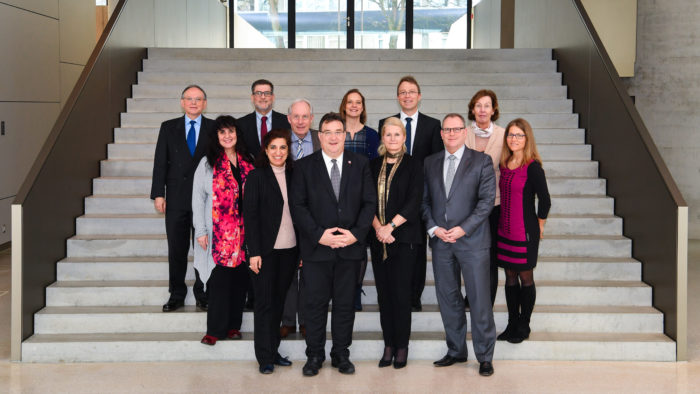 A delegation of representatives from German NEREUS-regions (Bavaria, Bremen and Hesse) met with chairwoman of DLR Prof. Pascale Ehrenfreund on Friday, 10th March at the DLR-headquarters in Cologne for a joint exchange and discussion on matters of common interest. Bremen and Hesse were represented at political level by their Secretary of State, namely Ekkehart Siering (Staatsrat des Senators für Wirtschaft, Arbeit und Häfen der Freien Hansestadt Bremen) for the Free Hanseatic City of Bremen and Mark Weinmeister (Hessischer Staatssekretär für Europaangelegenheiten) for Hesse.

Secretary of State Mark Weinmeister outlined in his introductory statement the core messages of the NEREUS-position paper “Recommendations on adding a regional dimension” that had been published prior to the release of the European Space Strategy and the role of the network with view to its implementation. In this respect he highlighted the importance of “acting together” and stressed that the regional representatives in NEREUS would be prepared to join this process actively. NEREUS as a network of regions would distinguish itself through a privileged vicinity to the European citizen. To this end he saw the role of NEREUS to support relevant European institutional actors in their efforts for promotion and outreach towards the society as well as education and training and knowledge transfer.

NEREUS-Vice-president Christian Bruns in his presentation of the network, drew the attention of the audience to the fact that NEREUS is going to commemorate this year its 10th anniversary of the signature of the Political Charta and explained why regions engage in interregional co-operations and partnerships on space applications. In particular with respect to the political dialogue with relevant European institutions and ESA the NEREUS-platform proved itself as an important forum for regions to define joint positions and strategies.

Secretary of State Ekkehart Siering emphasized the need to cooperate with respect to the common idea of Europe, in particular with view to the current challenges the Union faces. Reflecting on how NEREUS could contribute to better connect regions across Europe that are engaged in using and developing space applications, he called for putting a strong focus on promotion and communication of the added value of satellites. In this respect the meeting of DLR and NEREUS could be the fundament for a long term partnership on common European concerns.

Both organisations recognized the value of cooperating with respect to European topics and agreed in a first step to meet once or twice per year (Brussels or Germany) to identify and define activities or events that contribute to better transport political topics to society and political decision maker.