The general aim is to provide objective and timely information to the Walloon authorities to help farmers as well as to protect CAP funds.

The Walloon Paying Agency, managing different schemes relating to the Common Agricultural Policy (CAP), is in charge of maintaining up-to-date the Land Parcel Identification System (LPIS). The LPIS is the main tool allowing farmers to annually declare areas of cultivated fields and eventually the ecological focus areas via Geo Spatial Aid Application – (GSAA). Starting with the 2018 campaign, the GSAA will be mandatorily web based, which will increase the quality of the LPIS in terms of updating. The update is the LPIS upkeep process that deals with the changes to the land.

The space based solution

Remote Sensing (RS) is one of the ways to update the LPIS. In Wallonia Region, each year, a complete aerial images cover is available and, being compliant with LPIS quality requirements, is used for LPIS updates. These orthophotos are very useful for the farmers and for the update of the LPIS thanks to their very high spatial resolution (25 cm), the principal issue of these images is their delivery time, usually the aerial imagery is only available six months after their acquisition. In this context, the use of other images, with a high temporal resolution seems to be a good solution for an operational system. Since June 2017, the EU Copernicus Programme provides high temporal resolution Sentinel 1 (S1) & Sentinel 2 (S2) satellite imagery. The Walloon Region is covered by a 3 day revisit period for S2 sensors and a 2 day revisit period for S1 sensors. The research aims to find the optimal way for the implementation of derived product and results from high resolution Sentinel 1 & 2 satellite images in the operational chain used by the Walloon administration. This research is done by the Walloon Agronomical Research Centre (CRA-W).
Different vegetation indices are derived from S2 images and used for both: – object based classification in order to identify the crop type at parcel level – change detection in order to roughly spot the parcels where the boundary have to be updated and/or where land use is changed. 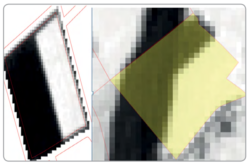 Two examples of change detections inside of agricultural parcels based on NDVI standard deviation (two crops on left side, a new road on the right side)

The main benefit for the farmers is the reduction of their administrative burden when they have to declare their agricultural parcels in order to receive CAP aids. Indeed, they would receive pre-filled declarations based on what is for the Walloon administration, the automation of the LPIS update would limit the number of field visits to the minimum necessary, i.e. what is not controllable with remote sensing data and new technologies. Moreover, the results would lead to better assurance on activities on declared parcels throughout the Walloon region which would increase compliance with the regulation and focus on prevention.

Outlook to the future

In spite of a theoretical short revisit time of Sentinel 2 satellites, due to very frequent cloud cover in Belgium, for an operational system the effective availability of images is very often a problem. The S1 satellites, as active sensors, acquire radar images independent of meteorological conditions (cloud free). Using directly radar images and some derived products (as polarimetric indices and coherence) crop type identification gives similar results as when using S2 optical images. By using both optical and radar images, the results of crop types classification are improved. Different scenarios are being developed to answer different real conditions for the Walloon administration.

“This application of Copernicus Sentinels will significantly improve the way which farmers are doing online aid applications and, for the Walloon Paying Agency, will help to keep the Land Parcel Identification System up-to-date and to move to the new checks by monitoring.”

The research is included in the framework of the SAGRIWASENT project founded by the Walloon region. The scientific partners of the project are the CRA-W and UCL-ELIE, with the collaboration of the DGO3 (SPW).