Follow-up: Safety and security dimension of space, the European Defence Fund and its multiannual perspective on 17 November 2022

NEREUS organized on the 17th November 2022 the first session on “The safety and security dimension of space, the European Defence Fund, and its multiannual perspective”.  The goal of the webinar and the next one to come (on the 30th of January 2023) is to introduce the participants to the safety and security dimension of space giving a first overview of the European Defense Fund (EDF) and its multiannual perspective. The session aims at enhancing partnership and cooperation between members, and identifying common goals, opportunities, programmes, and areas of interest.

The presentations are attached to the names of the speakers. Below you will also find the recording of the session.

In this first session, Guillaume Galtier (DG DEFIS) discussed the multiannual perspective of the European Defence Fund, the main instrument the Commission manages to fund defence collaborative R&D projects. He highlighted the main features of the programme as collaborative cross-border cooperation, competitiveness, innovation capacities of the EU defence technological and industrial base, and reduction of the fragmentation of the European defence capabilities.  Mr. Galtier underlined the importance of continuity in the EDF projects, which are structured with the aim of developing long-term partnerships.

In this framework, Mr. Galtier described the EDF Multiannual Perspective, which aims at facilitating the coordination of Member States in long-term planning and gives an overview of EDF main expected outcomes per category of action. The plan helps provide indicative targets in terms of EDF’s financial contribution. Mr. Galtier added: “The EDF is not there by chance, it was a long run to get there and is not the end of the run, we are concentrating on R&D, but also discussing what’s going next in terms of joint procurement in the sector of R&D”. 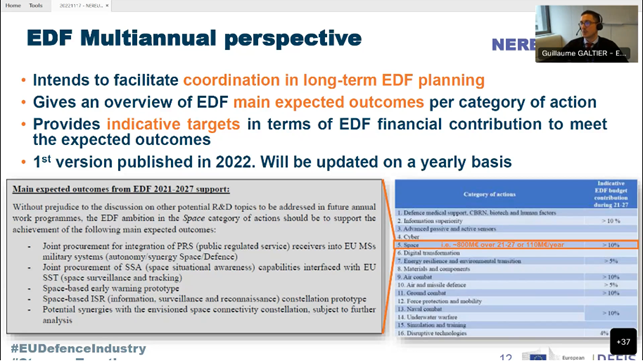 Mr. Galtier then described the three calls related to space of the 2022 EDF work programme.  In this framework, one research call concerns the launch of responsive space systems (EDF-2022-RA-SPACE-RSS), while the two development projects are respectively about the development of an innovative multi-sensor space-based Earth observation capabilities towards persistent and reactive ISR (EDF-2022-DA-SPACE-ISR), and a space-based missile early warning system (EDF-2022-DA-SPACE-SBMEW) the three projects are funded respectively with 20, 40 and 90 million euro.

In response to the question: “On the innovation spectrum, what does the EDF seek to achieve? Incremental improvement? Or does it look for something bigger, like next-generation combat systems?” Mr. Galtier replied that: “the EDF it’s all that together, innovation is a key element of defence R&D; the Commission trying to dedicate some actions to a really innovative incremental improvement, the EDF is about dealing with biggest challenges for EU defence, in terms also of next-generation combat systems”.

This first webinar also presented the interests and activities of the clusters present in the NEREUS network. Sharing their individual experience and views, different actors discussed with a representative of DG DEFIS how the EDF calls are developed and planned, and how NEREUS members can foster partnerships and cooperation in a regional context.

In this respect, Mr. Edoardo Camilli presented the point of view of SMEs describing what is the reality of the market. Mr. Camilli, a former NEREUS Trainee, started his own company in the safety and security domain. HOZINT Intelligence deals with real-time risk intelligence combining human and artificial intelligence to identify and verify information from media and social media (OSINT) on potential threats to physical security or business continuity. The connection of HOZINT with space is constantly developing, the company uses satellite imagery to geotag ad monitor the situation on the ground. Mr. Camilli highlighted how, at the moment, the information available via Copernicus is not real-time enough to provide operational and tactical support to crisis management units, but future projects in the framework of the EDF are aimed to overcome these technical obstacles. HOZINT is now involved in an EDF project proposal for the detection of anomalies and false data injection in the field of maritime surveillance. The idea is to explore the possibility to combine data such as SAS and SDBS with OSINT to detect possible matches within what is reported by satellite data in order to uncover eventual data corruption. 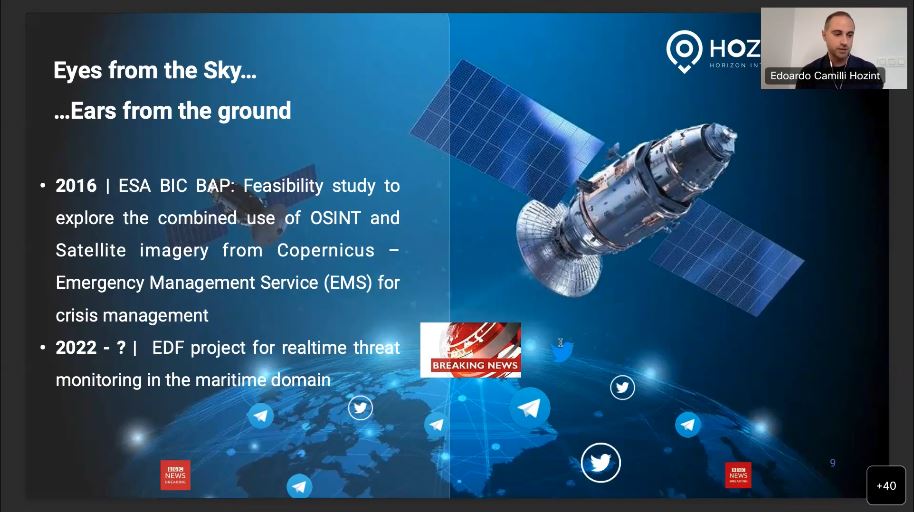 Mr. Camilli answering the question: “How do you manage real-time monitoring with EO imagery if delivery time is mostly GT 6 hours?” outlined how: “it depends on the scenarios, in the project we are submitting now, we are developing a feasibility study, probably the satellite imagery is useful in specific situations where we want to corroborate reports about drones strikes or air strikes where it is possible to wait hours, while the more real-time intelligence will come from other types of signals not necessarily images”.

In conclusion, Frédéric Renaudeau, Defence, Deep Sea, Skills&Training Adviser at Pôle Mer Bretagne Atlantique represented the views of the Clusters member of NEREUS. Pole Mer is a cluster of innovation in the maritime economy; the Cluster is involved in several projects stimulating cooperation and synergies between industries, large enterprises, and research centers in link with regional and territorial actors. The Cluster is deeply involved in the field of maritime safety and security, cooperating actively with the French Defence Ministry. In this setting, space applications play a major role, in establishing secure and accurate positioning, communication, observation, monitoring, and cybersecurity. Mr. Renaudeau renewed the invitation to NEREUS members to participate in some EDF calls together with French companies in the field of maritime monitoring and survey, as well as in the field of information sharing in high-intensity naval warfare. 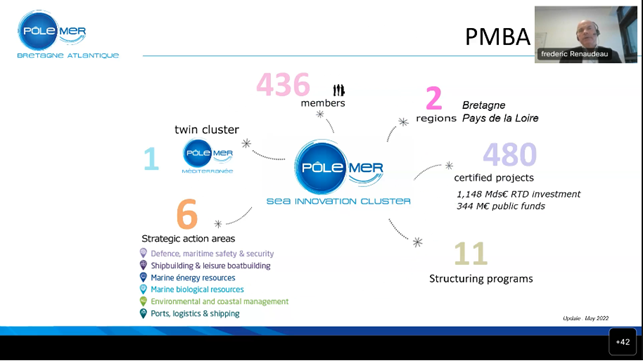 Describing the point of view of the industry, Mr. Renaudeau highlighted that: “The main difficulty is to organize an EU consortium, there is a need to develop mutual knowledge and partnerships between SMEs belonging to different countries, one way could be to organize at the European scale and through NEREUS a series of matching meetings, the second way is to avoid bad competition and promote synergies on common technological challenges”.

The next webinar is going to introduce the audience to the European Network of Defence-related Regions (ENDR) and the synergies between Security, Defence, and Space, and will take place on the 30th of January 2023 at 10:00 AM CET. Registrations are open!!

Watch the recording of the session: